When I was married I worked my a$$ off for my wife and kids. Don’t get me wrong, I believe a man should be the hardest working person in his house. That’s just how I was raised. But I was never taught how to “rest.” I attempted to be involved in every aspect of my household. If anything went down, I knew about it. I was “extremely” intense about raising my kids is such a manner that they would never experience the brokenness I felt I “endured” when I was young. I was raised in a single parent home by my mother, and she in my opinion was grossly “unprepared” to raise a black son during the “crack era.” I’ve come to realize that she did the best that she could, and I love her for that! But what 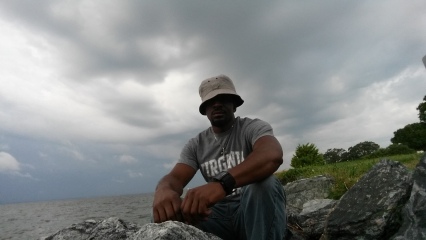 she demonstrated to me as my mother was to “control” the outcome of her parenting by obsessively overworking herself. She was overly involved in too many areas of my life.  I never felt I was hindered in any way until I became an adult, and started having kids of my own. It wasn’t until my “ex-mother-in-law”  pulled me to the side one day and said “your gonna let her wear a good man out!” As much I wanted to not understand what she meant, I immediately realized what she was referring to. I didn’t want to admit it, but I was “overworking” myself just like my mother did to take care of my family. Except I wasn’t a single parent. My ex-wife watched me bust my a$$ to take care of every facet of our household. At the time my mother-in-law made that statement, my ex-wife was not on great terms with her mother. I didn’t want it to seem I was aligning myself against my ex-wife, nor did I want to give my ex-mother-in-law any “additional” reason to discredit her daughter’s parenting. However, I knew she was right, and I suffered tremendously as a father for not heeding her “advice.”

I grew to feel my ex-wife’s capacity to parent our “large” family of 7 was severely insufficient. To me she didn’t seem to work as hard to care for our kids the way I felt a stay-at-mom should. I worked physically demanding jobs for most of our marriage. Despite the wear on my body, I still participated in managing my home. My personal  motto was I will not let my wife outwork me. So there was not a job at home that I didn’t do. The only thing I didn’t do (well) was the girls hair, which I felt was “decent” – oh well!! But my ex-wife “let” me work my little heart out. As a matter of fact when it came to any manual labor around the house she gladly “let” me handle every thing. From instructing and disciplining the kids to being a stay-at-home dad while she went back to school, I did it all! My kids took on the same mindset of their mother, if Dad wants to do all the work, let him go right ahead! I always felt that “they” (my family) would see my hard work as dedication, and “join” me in working hard to invest back into the family. I thought “they” would clean up after themselves, I thought my son’s would pick up the outside work, I thought my ex-wife would “work” in business with me, and we would eventually become a self-sustaining family that was truly living the “American Dream.”

That dream became a night mare!  I worked, and worked, and worked, and worked! Until one day, 16 years later, I was done! I never imaged that I would grow tired of what I thought was being a “good man” for my family. I felt unappreciated and under valued as a husband and a father. Even if I took on more responsibility than I should have (which I’ve come to realize I did), I always felt my family would’ve love me enough to not “let” me work myself into the ground. Instead they adjusted, and reaped the benefits – just like their  mother! My ex-wife and kids, have prospered during the separation and post divorce. As much as I am happy for them, I at times lament over not being able to personally experience the fruit of my hard work. Fortunately, I’ve learned a great deal as man and parent from my previous experiences as a husband and father.

I’ve learned that it’s not my responsibility “alone” to raise the kids.

Now that I’m a PreNup Pops, I work smarter and not harder! I’ve learned that it’s not my responsibility “alone” to raise the kids. Guess what? – the kids have a mother that is equally responsible for the kids! Being a “father-figure” doesn’t mean I have to “control” the family. My fiance has her own mind, her own will, and her own “kids.” I support her as a father-figure, and I’m quickly learning how to “stay in my lane.” It’s OK to determine how you want to implement yourself as a parenting support in your new family. It’s not necessary, nor wise to become the “substitute” parent to the kids. If they have biological parents outside the home that want to be “responsibly” involved, by all means create that space for them.

I don’t have to control the family to create security for “my” position as a parent. Whatever work I invest in the kids I “freely” give because I “choose” to do so. I now understand that it takes time for kids to learn how to appreciate and value your effort as a parent. Parenting is not a contest, and there should be no expectation of awards for your work (period)! I bust my a$$ now because I’m passionate as a parent, and I understand that part of my purpose is being a father. I no longer deprive myself of quality “me” time. It’s imperative as a father to balance you work as a parent with time exclusive from the “fam bam.” As a PreNup Pops your role is highly critical the success of your blended family, but not the expense of being ”worn” out! Take care of yourself because it’s your RESPONSIBILITY!”

Dealing with Child Separation After Divorce

I'm Done with ME!

What is Your Parenting “Cut” With?